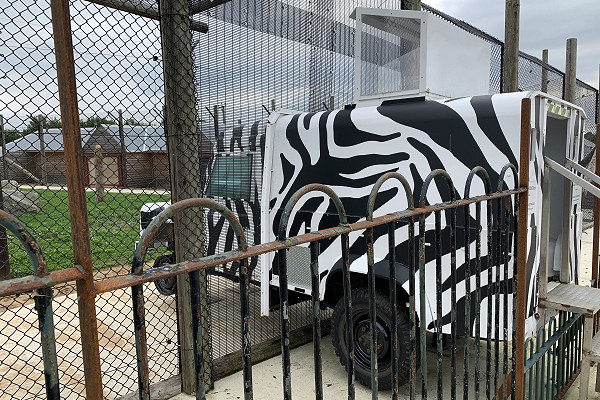 “You’ll hear the lions roaring,” we were told before we moved to Horncastle last year. Naturally, we responded incredulously. But now, living on the north side of town we often hear those big cats (it can sound as if they’re in the next garden) so I made myself a promise to check out The Wolds Wildlife Park as soon as I could. Then, the tigers moved in and my mind was made up for me.

Booking online was straightforward and I turned up on a sunny September afternoon. Having watched ITV’s Britain’s Tiger Kings I already knew that owners Tracy Walters and Andrew Riddel had employed a high percentage of reclaimed materials from their recycling business in building the park and so I was completely unprepared for the elegance of the place. There are just so many fine details like the bespoke stone carvings on the animal houses, the large, mainly-wooden animal sculptures that adorn the site, the wide pathways, the spacious enclosures, the landscaping, the cleanliness, the way that the viewing-lines are unobstructed and yet commensurate with the safety of the public and animal welfare. The enclosures contain features intended to enrich the animal’s lives and all of the animal occupants appeared unfussed and getting on with their lives.

There are many nice touches, some of them very imaginative. Want to get into the tigers’ enclosure? Well you can. There’s a safari Landrover seemingly buried in the cage-wall and if you climb through into the front seats there will be just the glazing and doors between you and those truly magnificent cats which could weigh up to 400 pounds. Their face-markings were mesmerising. Talking of the tigers, both they and the lions appeared as interested in us as we were in them. I can’t think why! Mind you, two of the lions, Mouse and Lorenzo, gave every impression of sleeping off a hard-night on the town.

There’s little point in cataloguing every animal in the park and there were plenty. A visit to the website will fulfil that need.

What is there for kids apart from seeing the animals? Loads actually. There’s a designated under-cover play area, a picnic spot, a gift shop and a spacious cafeteria with plenty of seating and some very nice ice-cream. The attractive and clean toilet block includes a separate baby-change area. All the children that I saw there appeared absorbed in studying the animals. Barriers were at kid-friendly heights and there were plenty of informative notices to help bigger-folk meet the questions from the littler ones. Did you know for instance, that the hairs on a lion’s tongue are to strip meat from bone, whereas for the domestic cat they just help it to lap up liquid? I didn’t either.

The car-park is large and access from the Louth Road north of Horncastle is easy. Every member of the staff that I spoke to was friendly and informative. 10 marks out of 10 for visitor experience!

My pleasant little excursion was yet another example of what this lovely corner of Lincolnshire has to offer both visitors and residents alike. Now, where to next? Suggestions anyone?