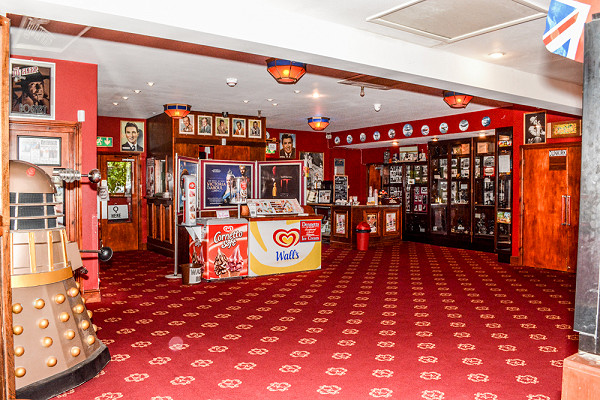 The Kinema in the Woods offers visitors with a unique cinema experience different to any other. The kinema is made up of four auditoriums, all of which are available for hire for a variety of different events such as birthday parties, private screenings and much more! The kinema is very unique in it's historic cinema design and it is also the only cinema in the UK to employ back projection for their screenings. Furthermore, the kinema also have an organist who comes to play the organ every Saturday night for the last film playing on screen 1, emphasising it's distinctiveness. The organist will also play at other busy times when the organist is available, however, the Saturday nights are the only time this is guaranteed. The kinema is so popular with the local community, in addition to visitors coming from far and wide, because of the unique vibe and experience that the cinema creates.

A special screening of the latest film Fisherman's Friends was held as a celebratory event to acknowledge the 100-year anniversary of the kinema. Kinema in the woods first opened its doors on Monday September 11th, 1922, at 7pm, which was formerly a sports and entertainment pavilion in the late 19th century. This pavilion was situated in a hotel, named The Victoria Hotel, which unfortunately burnt down on Easter Sunday 1920. The grounds of this hotel was then purchased by the founders of The Kinema in the Woods, Sir Archibald and Lady Weigall in 1922, who held the first screening (a Charlie Chaplin film) on September 11th, 1922. The kinema then ran successfully for many years and the iconic Compton Kinestra organ of the kinema, which is still played regularly to this day, was installed in June 1987. All of this history that is present within the kinema highlights how important it is to the local community and how impressive it is that the cinema has been open for 100 years!