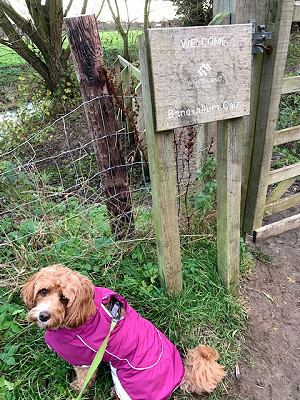 The countryside immediately adjacent to Horncastle doesn't exactly abound with woodland. So, it’s a real pleasure to be able to walk from the town-centre with your dog and into a 20-acre wood in about five minutes. Banovallum Carr is a 20 acre, mixed habitat woodland which also encompasses clear open spaces that was planted between 2001 and 2007 by the Woodland Trust and which lies to the south and west of Horncastle town-centre. Why is it so-named? Well, some believe the Romans named what we now call Horncastle, Banovallum, meaning strong spur or prominent place. If Banovallum sounds rather grandiose it’s balanced up by the rest of the wood’s name because Carr is Old English for swamp! I ought to point out that the area is far from being a swamp these days even though it lies between the old course of the River Bain and the Horncastle Canal and can be wet under foot and even occasionally flood.

The wood consists mainly of birch and alder with some ash. Willow and buckthorn provide foliage near the river and there are also some magnificent ancient crack willow and goat willow along the banks of the original river bank which the Woodland Trust intend to maintain as long as is feasible.

The wood is a reasonably secure place to let your dog off the lead as long as you’re absolutely confident of maintaining close control because of course we need to be mindful of other users and the wellbeing of wildlife. To the west and south the wood is fenced off from the adjacent farmland which often contains flocks of sheep. The old River Bain bounds it to the east. The flow of water in the old river is variable and depends upon how much water the river authority diverts down it. There are approximately 2 kilometres of paths running alongside the river-bank and through the woods. These can be muddy and perhaps I’m being fanciful but the local moles appear to erect their mole-hills directly along the paths. Also, I have never seen such mole-hills. They must have access to JCBs. The grass can be knee-height in the open spaces so, taken altogether, some parts of the wood might occasionally present a challenge to anyone with walking problems.

This wood is one of my favourite dog-walking places and I know that our dog appreciates it. There are loads of things for her to sniff and we can play training games such as ‘sit, stay and come’ over increasing distances. During the 18 months we’ve lived here the wood’s never been crowded. Whilst Rosie the cockapoo is doing her thing I can soak up the wood’s soothing vibes. The Japanese even have a term for it, ‘Shinrin-Yoku’ or forest-bathing.

How to get there: there are three entrances and all of them are easily accessible from the Magna Vitae swimming pool and leisure-centre carpark. You can walk along the path that runs between the left-hand side of the building and the old River Bain into the paddock behind the pool and leave by the gate at the far end. Follow the short path to the gate into the wood. Or, you could walk along the path on the other side of the building keeping the Horncastle Canal on your right, walk through the swing-gate into the field and cut diagonally left to find the same gate as mentioned just above. You could also keep walking ahead until on your left you espy a wooden bridge that leads to yet another gate about half way along the wood. The third entrance is over a wooden bridge from the rugby pitch which is behind the cricket pavilion, again easily accessible from the Magna Vitae car-park. I hope that you and your pooch enjoy the walk as much as Rosie and I do.

Thank you to guest author Michael Sheehan for his blog this month!