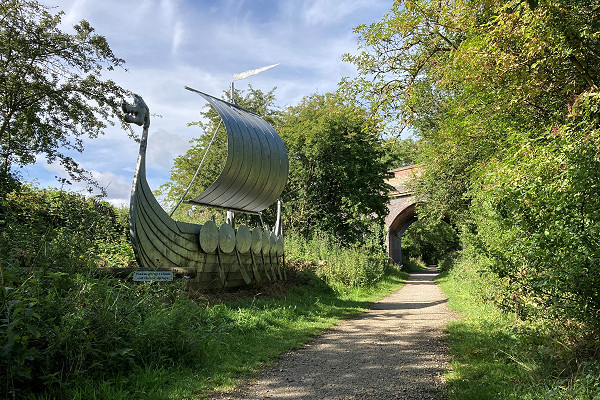 This summer will see Horncastle celebrate its railway heritage as the town marks 50 years since its branch line closed, back in 1971.

Local people had battled hard to build the line after the Great Northern Railway decided to bypass the town on their main line from Boston to Lincoln in 1848.

Not to be deterred they created a new company and raised the money needed to build their own branch line. It opened in 1855, with trains leaving the main line at Kirkstead, passing through the centre of Woodhall Spa and then down the Bain Valley into Horncastle.

Although the trains may be long gone, these old railway lines are still attracting visitors today. Part of the old branch line is now the traffic free Spa Trail from Horncastle to the edge of Woodhall Spa, and walkers and cyclists can take the Water Rail Way which follows the River Witham from Lincoln to Boston.

Both trails cross peaceful countryside and feature sculptures by local artists, as well as information boards about local nature and history.

Now Horncastle History & Heritage Society have launched a new leaflet to promote the Spa Trail as part of plans to mark the 50th anniversary. It features an illustrated map of the route with the locations of sculptures and heritage sights to look out for. There's also details of how to extend a trip on the Spa Trail to connect with the Water Rail Way – great for cyclists or more adventurous walkers.

History fans can also look forward to a special exhibition at the Joseph Banks Centre in Horncastle, from Thursday 29th July to Saturday 4th September 2021.

The End of The Line Exhibition will offer visitors the chance to discover stories from the line's history. Star exhibits will be a series of recently rediscovered photographs from the railway's heyday which have never previously been displayed in the town, as well as original railway items from Horncastle History & Heritage Society's Town Archive.

The Society is also planning other events alongside the exhibition, including an expert talk and a special open weekend with a chance to see local railway artefacts from private collections, as well as a newly-completed model of Horncastle station. Details of which will be announced soon.

It's also only a short trip to the nearby resort of Woodhall Spa, where the award-winning Cottage Museum is located right next to an old level crossing from the railway. Here visitors can find out how railway companies promoted the spa, and why the Victorians flocked to 'take the waters' on healthy holidays here in the Lincolnshire countryside.

Free copies of the new Spa Trail leaflet can be picked up at the Joseph Banks Centre and at the Woodhall Cottage Museum, or downloaded as a PDF from Horncastle Walkers Are Welcome.

Celebrating this December in Horncastle